On October 23, 2020, Professor of Media, Culture, and Communication Nicholas Mirzoeff gave a public lecture as part of the West Hollywood Aesthetics and Politics (WHAP) series. The Fall 2020 Lecture Series, “Black Out: On the Surveillance of Blackness,” is presented by the CalArts School of Critical Studies and the West Hollywood Public Library. A recording of the lecture can be viewed here.

Media and culture theorist Nicholas Mirzoeff has written extensively on the complex of visuality, in which we are governed through the control of what we see and sense.[1] Insofar as our notion of the “aesthetic” is derived from the ancient Greek word aisthisis, referring to sensory perception, visuality is an “antiaesthetic” regime, in which we have lost the ability to make sense of what we feel and perceive, and “the body can no longer make sense of what is presented to it.”[2] A classic example of visuality in operation is when the authorities, typically the police, tell us: “Move on, there’s nothing to see here.”[3]

These forces of visuality and antiaesthetics combine to allow us to ignore the destruction of our Earth, in part, due to a misplaced belief that those same authorities will solve it all. But in fact, no one, or nothing, has control over the Anthropocene and its unintended consequences.[4]

If our senses are out of touch with reality, and whatever we typically see or perceive is subject to continuous control and manipulation, Mirzoeff proposes asserting our agency by claiming what he calls the “right to look.” By Mirzoeff’s account, insisting upon one’s right to look despite being told “there is nothing to see here” is the beginning of political subjectivization. This formation of subjecthood is a form of recognition that occurs through the creation of an “interface between two or more people as they look at each other.”[5] The activation of this interface between more than two produces consensus, collectivity, and commons.[6]

To Progress by Christine Yerie Lee is a three-minute video artwork that premiered online on October 2, 2020. The artwork takes the format of a letter, ostensibly addressed to the Indian artist and filmmaker Utkarsh Raut, whose name in Hindi translates to the eponymous “Progress.”[7] The video documents Lee’s observations of her suburban landscape and is accompanied by her ruminations in voiceover. By addressing and acknowledging its viewer, and in turn, allowing itself to be seen, To Progress creates an “interface” between Lee and its viewers.

The video begins with a view of the side of a building, perhaps a house, tinted golden yellow by the bright afternoon sun. But obscuring our view are two dark bulky shapes taking up the central portion of the frame. 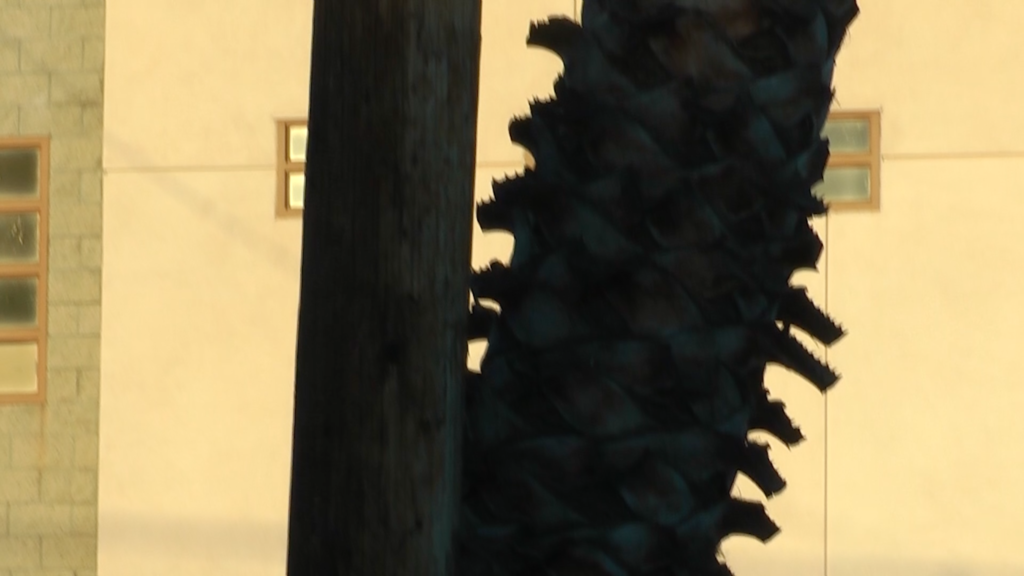 These dark bodies are eventually revealed to be a wooden utility pole and the angled trunk of a solid monopodial palm tree. The frame never widens enough to show them in their entirety. As the camera continues to move upwards, it slowly reveals that thick industrial steel cables have been lassoed around the trunk of the palm tree in order to stay the telephone pole.

Lee offers no explicit comment on this brutal gesture, but draws our attention closer to this entanglement by overlaying a smaller video window within the larger frame, in which we see a close-up of the cables and its metal brackets. The view in the smaller window slowly travels along the cables. 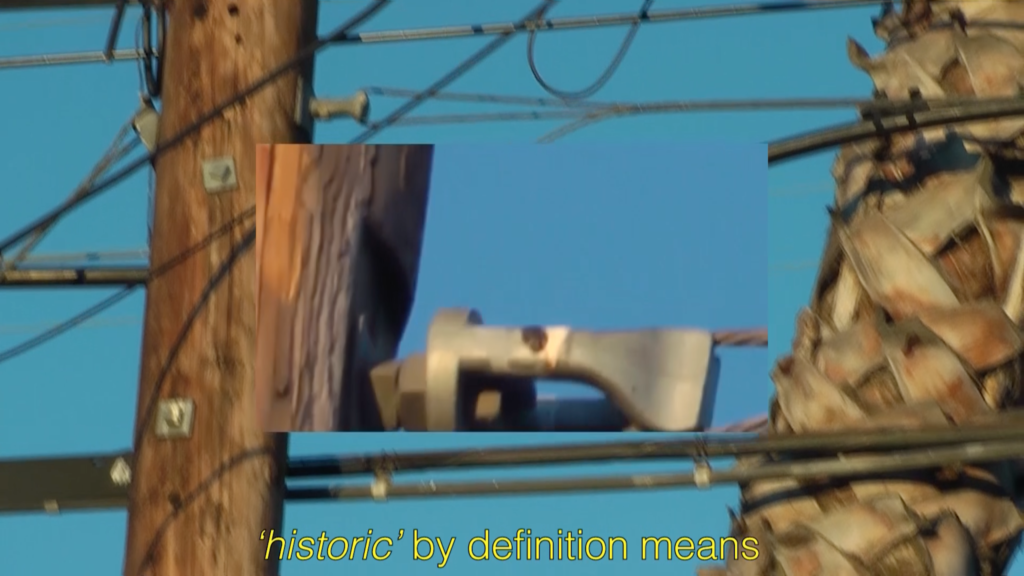 By layering the frames on top of one another, Lee denies the viewer a unified or totalizing visual field, and instead, introduces a form of vision that is partial, decentered, and cropped. This form of vision opposes the totalizing schema of “visuality.”

To Progress contests the “antiaesthetic” by choosing to focus on these ugly, invisible, and forgotten parts of the landscapes that we live in but have learned to un-see. Lee redirects our attention to the unspectacular, these areas where there is purportedly “nothing to see here.” As a form of refutation of the regime of visuality, To Progress performs an act of countervisuality by asserting that there is something to see here.

The Storm of Progress

To Progress meditates on the strange nature of what we now refer to as “pandemic time.”[8] Lee begins, “We’re living through a historic time,” and then asks the plaintive question: “But how can one be simultaneously living… and of the past?” As Lee points out to us, the notion of “historic” time seemingly disregards those still living in the now: us. And to look at our present through the lens of the future is to take on an impossible perspective. Lee’s statement imagines and vocalizes an unspecified “we,” constituting herself together with the audience as a collective that is sharing in this same experience of paradoxical temporality.

Her voiceover continues, “Historic by definition means ‘famous or important in history / or potentially so.’” The notion of the “historic” seems to inflate the importance of our contemporary moment, singling it out from another sense of time; ordinary, everyday, and non-historic time. Yet, the present is actually not present. As Lee tells us, it has been violently destroyed and excised. “Every moment is then living up to the last / bound by the potential of the future / blasting right through the present.” This “blasting” through the present creates a rupture in linear time. 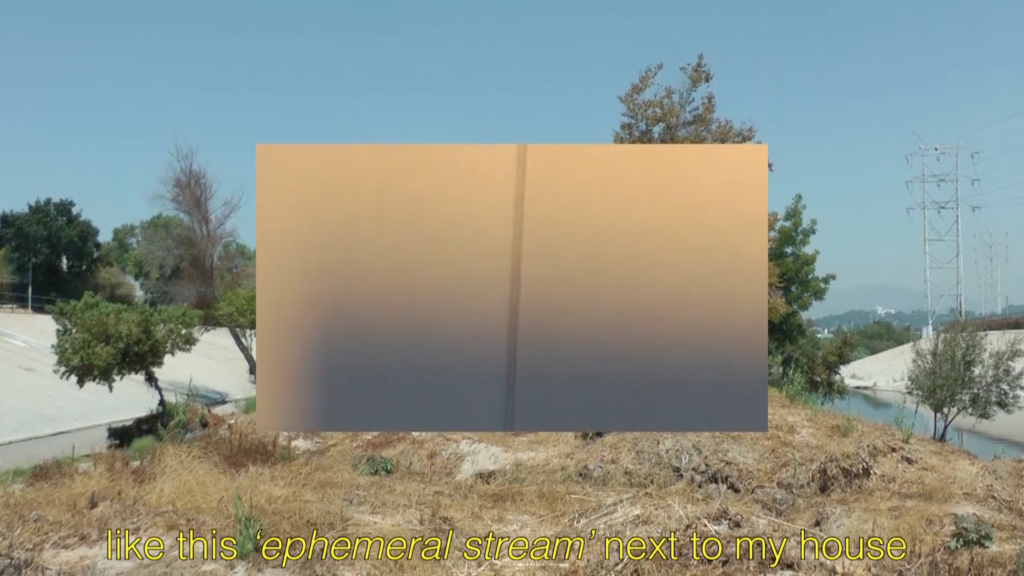 Through this rift in time, To Progress reinvents a return to the prehistoric. Speaking over partial views of a low-lying Los Angeles River in the middle of the dry season, Lee muses, “Maybe we did come from clay.” According to this earthen cosmology, early humans were “shifting and slipping into different states … [while] remaining pleasantly porous.” Through her retelling of a mythical origin of humankind, Lee envisions another kind of human, or at least, another kind of human body that is permeable and continuous with its environment.

During this ancient era, Lee continues, the Los Angeles River “used to come and go as it pleased / drying up and violently flooding / when it felt right / before being forced to take / the shape of a river.” Before being channelized, we imagine, this “ephemeral stream” had its own agency, preferences, and will to being.[9] By contemplating the river in the present while evoking its pasts, real and imagined, Lee creates a cyclical time loop that enfolds what Mirzoeff refers to as the “mise-en-abyme” of deep time.

A storm blows in from Paradise as the angel of history takes flight. Driven toward the future, the angel’s eyes remain fixed on the past as wreckage piles up before it. Walter Benjamin notes, “what we call progress is this storm.”[11]

Toward a Restoration of the Commons

Raut, originally from India, is based in Finland, ten hours ahead of Los Angeles, where Lee is based. As Lee notes, “I am writing this to you from your past / which will always be your history / and consequently my future / you will always precede me.” In a moment when state and international borders have been shut and travel is difficult, To Progress interpolates different places and time zones, and instantiates the possibility of solidarity across these temporal and spatial barriers. Lee invites us to be “all at once here.” For Lee, “here” is not located in space, but in time. 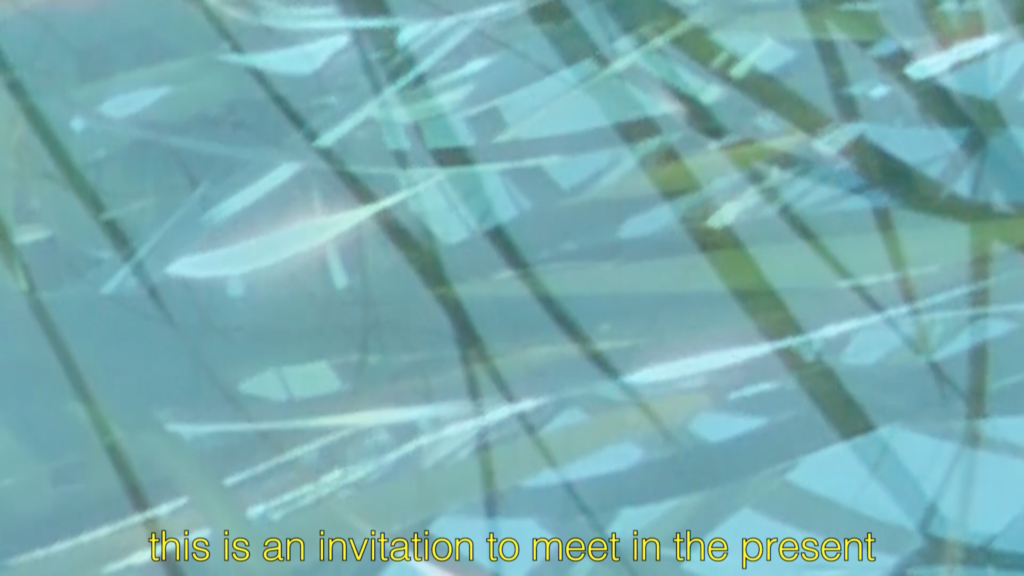 If, as Lee says, every moment is “blasting” us through the present, To Progress documents a time of simultaneous destruction and creation, which Benjamin would call an “epic moment” being “blown apart in the process of construction.”[12] And as Benjamin reminds us, in contrast to these powerful forces of destruction, the potential for the new to arise does not belong to grand or dramatic gestures, but always remains “a weak messianic power.”[13]

In our time of crisis, To Progress speaks to the potential of the ugly, the murky, the wounded, and the “weak” to wedge open the possibility for the restoration of the commons. “For every second was the small gateway in time through which the Messiah might enter.”[14] The time—to look, to act, to begin— is now. 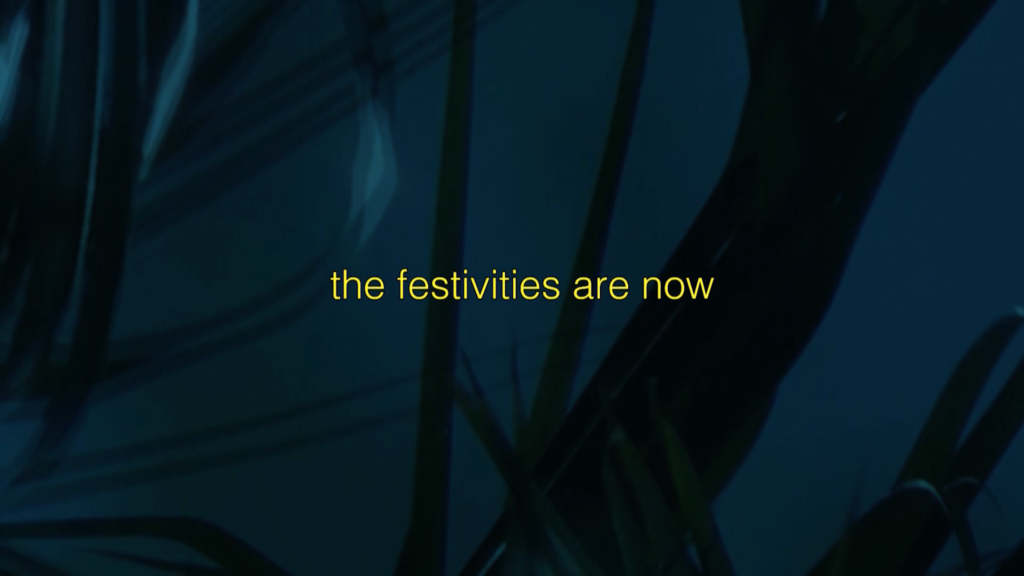 Special thanks to Christine Yerie Lee and Adeline Chia.

[5] Nicholas Mirzoeff, “The History of the Anonymous and Horizontal Visuality” in eds. Jill H Casid and Aruna D’Souza, Art History in the Wake of the Global Turn (Williamstown, MA: Sterling and Francine Clark Art Institute, 2014) 201.

[7] Produced in the framework of Trojan Horse Summer School 2020.