In 2015, Matthew Poole and Manuel Shvartzberg edited a volume of essays called Politics of Parametricism: Digital Technologies in Architecture. Following the launch, they were invited to talk at the WHAP! lecture series in 2016.

In the following text I will summarise Manuel Shvartzberg’s WHAP! lecture, respond to its main claim which links deregulation and parametricism in the hopes of an organic and effective urban development practice, and comment on why parametricism has since then again somewhat fallen off the radar.

Parametricism is a term coined by Patrik Schumacher, principal of Zaha Hadid Architects, in 2008:

‘Systematic, adaptive variation, continuous differentiation (rather than mere variety), and dynamic, parametric figuration concerns all design tasks from urbanism to the level of tectonic detail, interior furnishings and the world of products… The task is to develop an architectural and urban repertoire that is geared up to create complex, polycentric urban and architectural fields which are densely layered and continuously differentiated.’[1]

As a method, parametricism draws on algorithms and programs to influence design processes. It sets itself against both the homogenisation of central planning, and the pure difference of completely unrelated elements. Instead, each component in the parametric approach influences the entire equation and thus has an influence on the next design element. The hoped-for result remains legible while being complex and, as argued by Schumacher, can cater to the consumer needs of the post-Fordist multitude.

Manuel Shvartzberg’s presentation is a historical ontology, working to root parametricism in a larger historical context, primarily by telling the history of the (digital) swarm.

It begins in 1987 by an article published in Computer Graphics by Craig W. Reynolds, titled “Flocks, Herds and Schools: A Distributed Behavioral Model.” This article, which stirred waves far beyond the usual audience of a rather specific journal, was quoted by sociologists and biologists as much as people working in the field of programming. In it, Reynolds describes the results of a program he had developed, which could simulate swarms of birds and other lifeforms. The movement of “flocks, schools and herds” was ultimately unpredictable and not centrally organised, yet could still be simulated through three rules, Shvartzberg recounts:

This modelling has found application in many fields; Reynolds himself moved on to design swarms of artificial life for the movie industry. In the field of architecture, which Shvartzberg is primarily interested in, it constitutes one of the backbones of parametricism. It is this swarm behaviour that legitimises the logic of uncoordinated yet coherent urban planning and building.

Drawing from Schumacher’s belief that parametricism is the answer to an evermore globalising architectural practice, swarm aesthetics too is seen by Shvartzberg as a geopolitical movement. In fact, Shvartzberg argues, Adam Smith’s allegorical use of the invisible hand to describe the self-regulating market can be reimagined through the logic of the swarm. Another crucial step in the development of this thinking is rational choice economic theory, developed just down the road from the location of the lecture, in Santa Monica, in the headquarters of the RAND corporation, and what Shvartzberg calls microeconomic devices.

As a second dimension of the development of parametricisim, Shvartzberg recounts the narrative of the MIT Media Lab, founded in 1985 by Nicholas Negroponte. This Media Lab grew out of the Epistemology and Learning Research Group at the MIT Architecture Machine Group, founded by Seymour Papert. 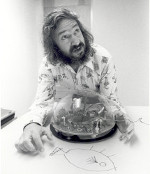 Papert had been the lead developer of logo, a programming language with which children could learn basic concepts of programming as well as geometry and mathematics in an environment of self-learning. This second leg of Shvartzberg’s story again proves parametricism’s belief in self-learning and decentralisation.

The swarm architecture and urbanism that Shvartzberg speaks about is a clear response to and criticism of modernism and central planning, of which Soviet constructivism is the ultimate example. Finding himself disillusioned with central decision-making’s ability to answer the needs of its consumers, Shvartzberg’s position is one critical of coordinated social action and central planning and he draws out a dichotomy of soviet constructivist central planning on one hand and a neoliberal swarm as its answer on the other. 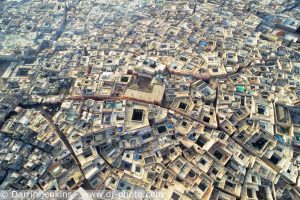 Disenchanted by the many failures of centralised planning initiatives throughout the 20th century. Shvartsberg presents parametricism, in its conceptual link to swarm intelligence, as a potential solution to urban problems. This proposition is understandable and interesting. Parametricism’s possible ability to respond effectively and flexibly to any urban environment is a great opportunity. He hopes that the swarm, as a new invisible hand, might hold the key to a coordinated yet decentralised growth that ties the swarm as a type of rationality to the political language of vitalism and deregulation. It seems we have found a technology that can straddle the invisible hand and be unleashed for the greater good of any city.

As part of this proposition, Shvartzberg is evoking organic, dense cities, which grow in a self-responsive and complex way and are also aesthetically stimulating. Two of the city spaces Shvartzberg is working with are Barcelona and Marrakech. It seems to be of little importance, that the aerial photograph of Marrakech is depicting a kind of organic city development which predates the neoliberal/soviet dialectic Shvartzberg at other times is invoking. Of course, swarm intelligence has arguably always been around, but the examples certainly were not created through parametricism and thus do not necessarily strengthen an argument for a contemporary neoliberal agenda of deregulation. While I can imagine that Marrakech has not grown by centralised planning in the last few centuries, I cannot vouch for it to have been a climate of deregulated open markets. Similarly, some of the major projects and experiments in Barcelona, such as its famous superblocks, are centrally planned and executed through the city’s housing and mobility plans. And if we look at some of the global cities that are being increasingly deregulated in an ongoing commodification of both public space and the right for housing—as is the case for example in Los Angeles, which is currently undergoing major re-zoning, tax incentives and removal of regulatory boundaries to stimulate investment and development—we can see that the resulting buildings might not necessarily turn out to be organic structures of both complexity and legibility, as Schumacher and Shvartzberg would hope. Rather, they might result in the homogenisation of space, much like the Soviet residential blocks Shvartzberg is so afraid of. And while in the Socialist Federal Republic of Yugoslavia the right to housing was famously enshrined in law, Los Angeles and other cities on a decade-long trajectory of progressing deregulation is struggling with an apparent problem with homelessness and a population that spends an average of 41% of their monthly income on rent.

To be clear, Shvartzberg is by no means uncritically advertising for a neoliberalisation of architecture, urbanism and politics. While his disbelief in central planning definitely comes through in the lecture, he does not take a clear position on the parametric response offered by Schumacher and others. Instead, Shvartzberg limits himself to a historical contextualisation of the phenomenon—though a certain hopefulness can be sensed.

I believe that Shvartzberg is well aware that things are not simply black and white. There is a definite allure to parametricism, both conceptually, as well as aesthetically, and Shvartzberg is clearly drawn to it. However, he also does not try to amplify or advertise any particular ideology and seems aware of both risks and opportunities that come with this practice and its politics.

Shvartzberg’s and Poole’s book is trying to make sense of the movement of parametricism in a comprehensive fashion, at times generous, at times critical. And yet, even this engagement seems partially problematic. However, parametricism has arguably failed to have the impact Poole and Shvartzberg are prophesising. To large extent, this might be due to parametricism’s ‘inventor’: since the publication of the book, Patrik Schumacher, who also wrote the first chapter for it, has made himself rather unpopular. He has hailed Brexit as an opportunity ‘to roll back the interventionist state and unleash entrepreneurial creativity’ and proposed to eliminate social housing and privatise streets. Meanwhile, the prolific anarcho-capitalist believes himself misrepresented and demonised.

Schumacher has become a taboo for many, but what are the implications of such an ostracisation for Shvartzberg and his book? Shvartzberg has since expressed some regret for the ‘undue megaphone some of us gave him.’[2] Albeit his engagement with Schumacher’s thought was sympathetic, it was perhaps also comparably critical. In the article that is attempting to make sense with Schumacher’s unpopular statements, Shvartzberg’s own engagement with him, and the simultaneous rise to power of Donald Trump, Shvartzberg writes that ‘Schumacher critically mischaracterised “thought” for a form of ideology that took the most formulaic tenets of “neoliberalism” and gave them a veneer of realism, even flesh.’ [cite]

In this insightful analysis, which sometimes reads as a letter of apology and confession, sometimes as a defence of Shvartzberg’s own position, we can find out a lot to make sense of the ambiguity I felt when watching his WHAP! Lecture:

Schumacher embodies architecture’s love affair with a neoliberal script of productivity at all costs, of relentless managerial optimization, and of a division of labor whereby architects disavow their critical faculties to become mere operators in a market for purely instrumental design services.

In his repetitive calls for a new world architecture, “parametricism,” we failed to see the totality of which his compulsions were an expression. In fact, it was always right in front of us—a macho mentality of control masked by an obsession with functional operating systems, governed by automatized heuristics and axiomatics; an architecture of meaningless flows; a politics of the city subsumed within a fixed set of procedures mediated by technocrats and bound, suffocatingly, by moralistic economic rules—the totalizing vision to which his architectural project uniquely gives form.

He goes on to criticise Schumacher’s parochialism in the ‘two key dimensions of his rhetoric, the universalizing, if not actually planetary, scale at which he pitches his ideas, and the focus on managerial ethos, systems, and tools that makes it a project of governmentality’ while also underlining the importance of this double focus, something he already mentioned in the lecture, when speaking of both the geopolitical reach and microeconomic devices.

4: Looking forward—turning our gaze to infrastructure

Shvartzberg goes on to, with the help of Keller Easterling’s Extrastatecraft: The Power of Infrastructure Space, line out the impasses and possibilities of our current thinking on infrastructure, coming to the conclusion that ‘to make these accounts as technically detailed as possible, but also as inclusive and sensitive to actually existing solidarity, dissent, forced equivalences, and structural determinations, is our best defense against authoritarian hegemonies—of the Schumacher-Trump variety or otherwise—and our best chance at thinking a truly different world.’

To me, it seems that this turn back towards infrastructure is Shvartzberg refocussing on the complexity of urban space, rather than his earlier engagement with a particular response to that. Acknowledging the difficulty of the urban question rather than amplifying a simple answer, Shvartzberg is once again opening up to scholarship, to multiple ways of response, and invites us to delve into an important and interesting field full of contradictions, complications, and avenues. 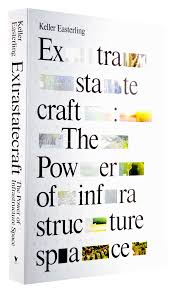 Josh Widera is a graduate student in the Aesthetics & Politics program at CalArts.